Chalice Paul-Missing Person
Copied and Pasted:
What do I think is the question that Is what I have been posting on racing blog pages.
I think it has been 42 years that Chalice Paul has NOT been investigated and brought charges against John Paul Sr.
The following people who were most likely last seen alive with John Paul Sr and missing….
Errol “Butch” Thrower who married Glenda Joyce McGaughy Paul (Sr’s first wife) in Muncie Indiana but divorced her a year later after he got busted in Louisiana with the Paul’s then goes missing.
David Cassorla who smuggled drugs with the Paul’s gets a divorce then he goes missing.
Chalice Alford Barnett Paul who was married to John Paul Sr then goes missing when she was attempting to get alimony during her separation.
Colleen Wood who was living on John Paul’s sailboat in Fort Lauderdale, Florida and planning a sailing trip around the world with him then goes missing.
Then there is some mystery man who’s body floated ashore in Spain according to the only living son of John Paul Sr’s statement Michael Paul.
I think it is time for the #FBI #FBIInternational #USMarshals #thailand government start bringing some justice for the families and friends of the missing. 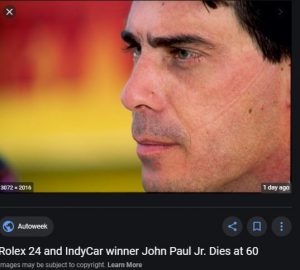 There has been a lot of press about John Paul Jr’s passing yesterday the after his death on racing pages and Internet Social Media accounts. Only one story did they mention Chalice Paul and it was Autoweek Magazine. We deeply appreciate the mention and hope it now will shed light on the fact a beautiful young woman vanished off the face of the earth and most likely the number one suspect was John Paul Jr.’s father John Paul Sr. If any of you racers would like to come forward and contribute to the memory of John Paul Jr please contact us through the website at info@chalicepaul.com Here is the Autoweek article link below. https://www.autoweek.com/racing/formula-1/a35094029/rolex-24-and-indycar-winner-john-paul-jr-dies-at-60/#:~:text=%E2%80%9CJohn

Trailer for Part two of Crime in Sports Episode #37 the story of John Paul Jr. and John Paul Sr. https://www.youtube.com/watch?v=1ArWQEuHQvs